STROBIGOAbout UsNo.580 Changxi Rd, Jiangnan industrial, Linhai, Zhejiang, ChinaTaizhou Bright Plastic Co., Ltd. is an international brand headquartered in Taizhou, the hometown of the most developed Plastic & Molding technologies and businesses in China. Our company is specialized in manufacturing dog food storage containers, trash bin, and sharps containers, with 15+ years of OEM &ODM experience. Incredibly flexible management and continuous self-improvement has resulted in rapid development and growth in the last few years, driving our business to spread across over 50+ countries and regions in the world, and our quick-response system has been optimized to meet any kind of demand in terms of design, quality, quantity, budget, and

Recently, Rochelle Walensky, director of the CDC of the US Centers for Disease Control and Prevention, admitted sadly: Delta has become a mainstream strain worldwide and is driving a surge in deaths across the United States.

In the past week, the nation’s average daily increase has reached 26,000. This is the first time in half a year. For the first time, cases in all 50 states have risen.

In just two weeks, all states in the United States have rebounded. The number of newly diagnosed infections per day in 15 states has doubled! 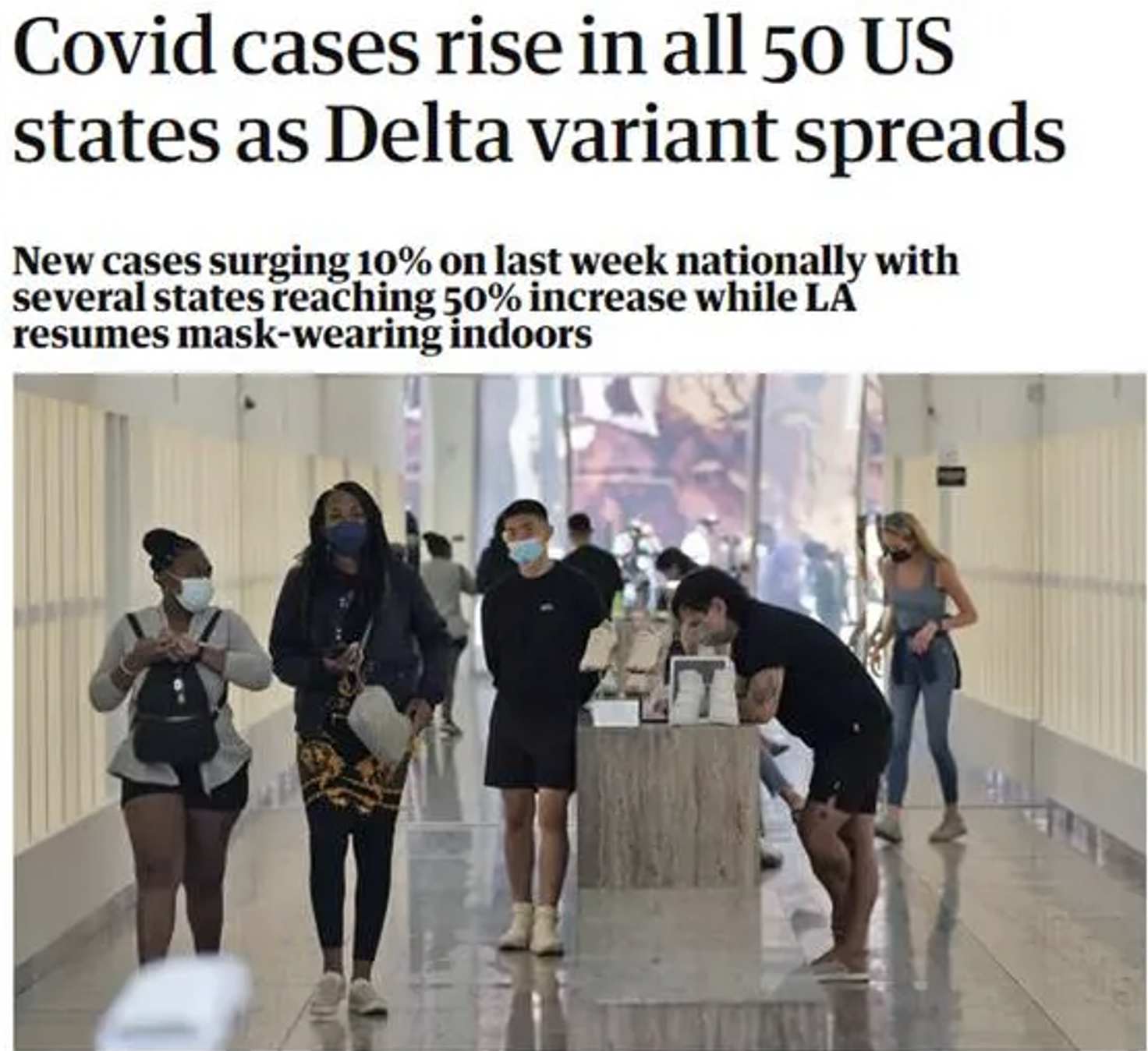 In just 3 weeks, it has increased more than 5 times!

At present, the number of new cases in all 50 states in the United States is increasing.

Even more frightening is that children have almost become the most vulnerable group.

The state of Arkansas where she lives is the state with the lowest vaccination rate in the United States. Only 35% of people have been vaccinated, and it has unfortunately become the hardest hit area of the epidemic...

Here, it is currently one of the states with the most new cases in the United States.

Children over 12 years old can be vaccinated, originally, caia also had the opportunity to be vaccinated, but as a "quite rigorous and responsible" mother, with a "cautious and wait-and-see" attitude, she refused to let her daughter be vaccinated.

"It turns out that I think the new crown is like the flu, not that serious. As long as you take preventive measures, such as staying at home most of the time and wearing a mask, the virus will not come to your door..."

Only 2 days later, Caia quickly became critically ill and went on a ventilator.

Two weeks after admission, the child's condition continued to deteriorate.

But there is nothing she can do except pray.

At this stage, among new infections in the United States, the delta variant strain accounts for more than 51%.

Subsequently, experts from the US Centers for Disease Control and Prevention had to admit:

The Delta strain is more than 2 times more infectious than the original strain. It can also damage the human immune system and reduce the vaccine protection rate.

Even if the vaccine is fully vaccinated, there is a possibility of re-infection.

In Los Angeles County, over 1,000 new cases were diagnosed daily in the past 7 days.

Clark County, where Las Vegas is located, is even worse.

The weekly increase rate is three times higher than in Los Angeles County!

At present, Las Vegas, Sacramento, Fresno, YOLO, and many other places have required to re-wear masks indoors. 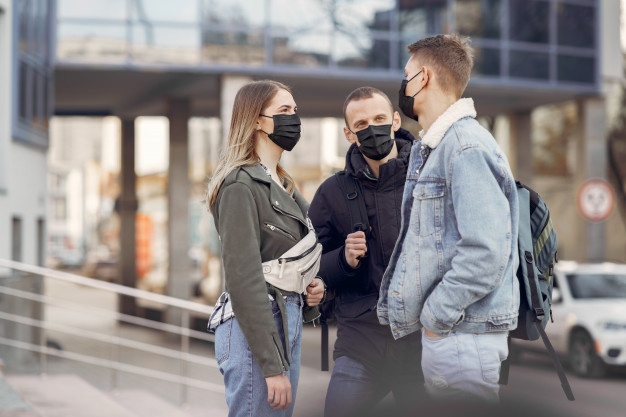 At the same time, many places in the United States began to announce:

Due to the continuous and rapid increase in new crown cases,

Americans who have been vaccinated must also be forced to wear masks again.

The mask order has been re-effective since July 17th!

A group of people rushed to get the third shot!

On June 15, Israel, which had an adult vaccination rate exceeding 85%, announced:

All people take off their masks!

For a time, there were thunderous cheers in the streets and alleys.

People threw their masks into the sky, chanting freedom:

"We are the first country in the world to achieve universal immunization!" 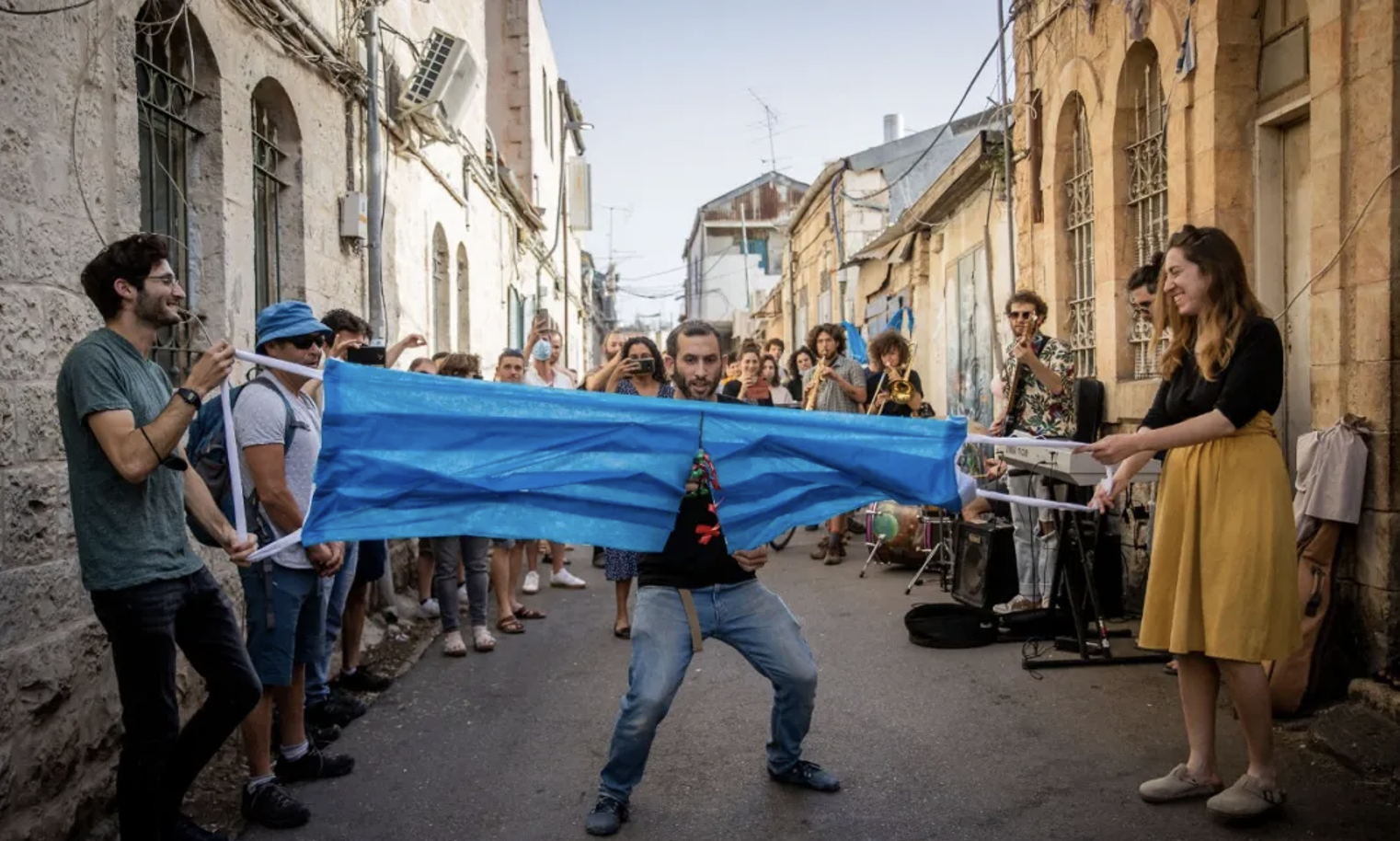 However, after only 10 days,

The Israeli epidemic is resurrected, and it will be fierce again!

The number of cases nationwide has doubled rapidly.

An old couple in their 80s,

Both have completed two doses of COVID-19 vaccination,

However, both of them died of infection this week.

Among the newly diagnosed patients, over 90% are infected by the Delta variant!

Each of the three major characteristics of this wave of outbreaks makes people shudder:

1. Over 90% of new cases are infected by the Delta variant

2. Half of the infected are children

3. More than half of the infected people have been vaccinated against the new coronavirus

At the same time, the government reluctantly announced:

Israelis must learn to "coexist with the new coronavirus for a long time." 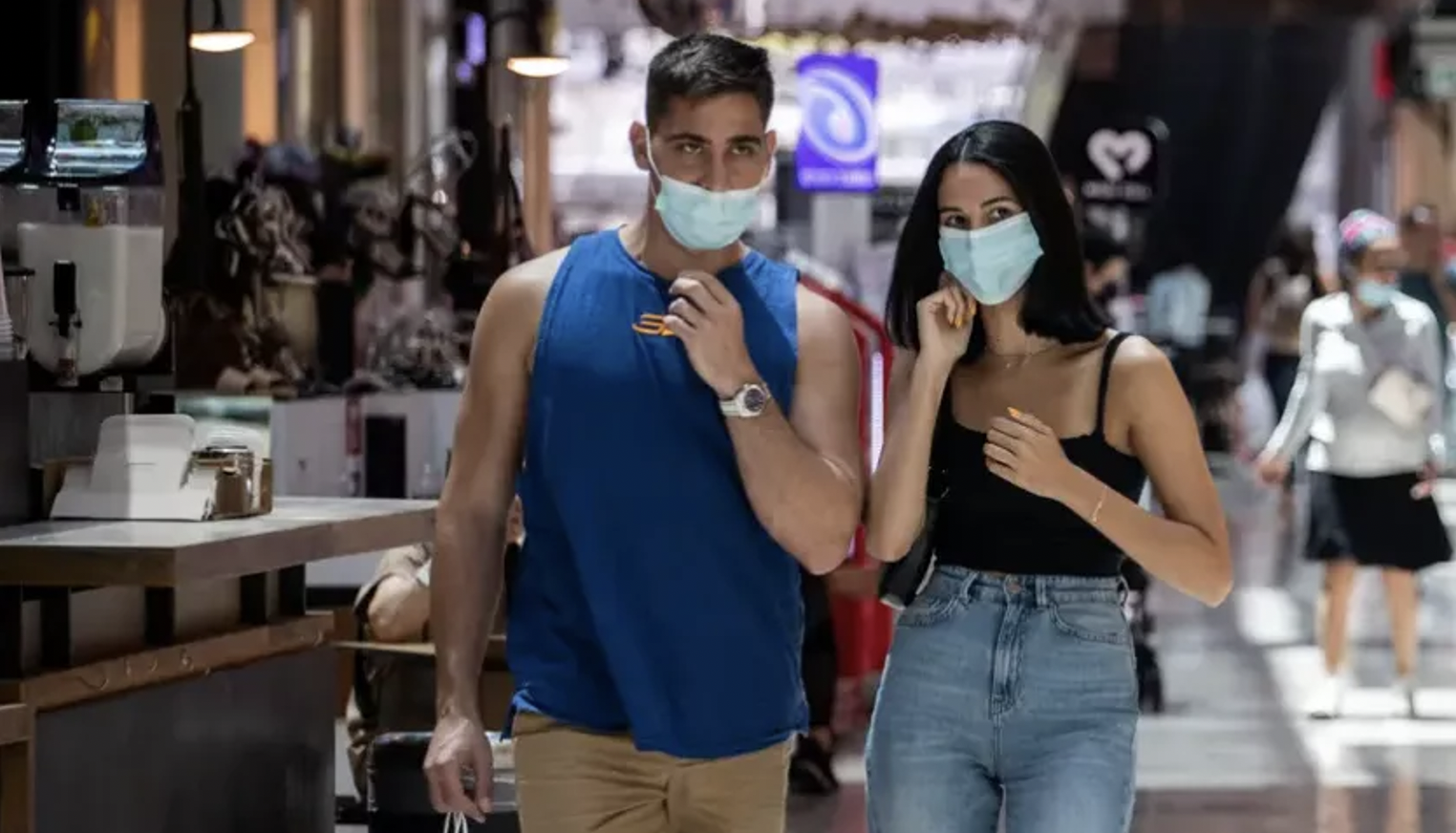 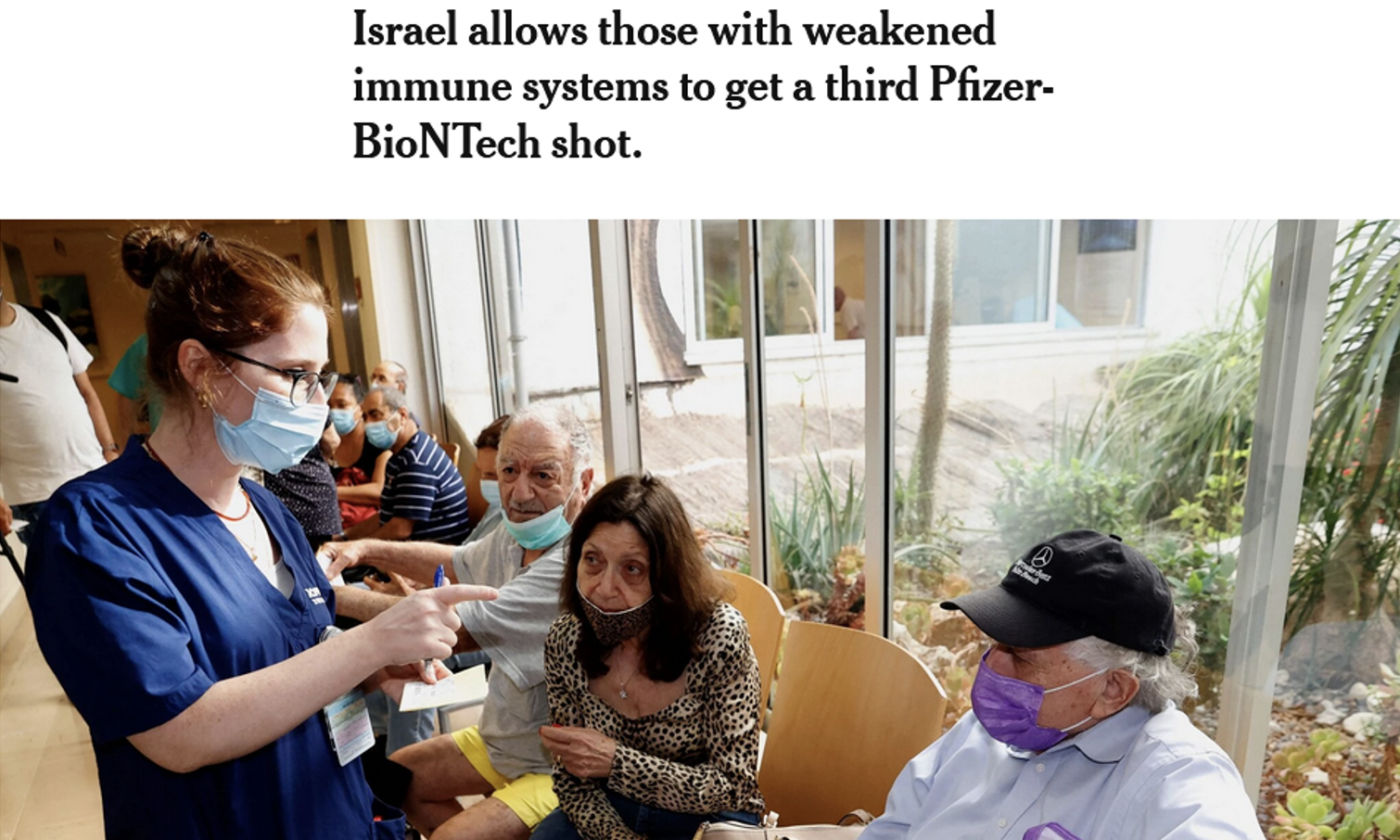 Dr. Arik Haas, from the Israeli Ministry of Health, submitted a report.

"People who were vaccinated earlier (mainly in January this year),

The correlation between the two is growing. "

Current data from Israel may indicate:

The protective effect of the new crown vaccine may begin to weaken after 6 months.

"The new crown is constantly evolving, from Delta to Lambda,

This is the nature of viruses.

"However, we humans also have a nature, that is to survive,

Do everything possible to let more people live..."

"A model of anti-epidemic" Israel, "killed the United States, which no longer wears a mask",

One after another, they were furiously counterattacked by the Delta strain and fell again.

Even the United Kingdom, which was bitter and unblocked, was not spared.

A month ago, the British Delta strain began to spread, but Prime Minister Boris announced: Take off the mask!

Sure enough, England ushered in a fierce counterattack...

In the past week, the number of newly diagnosed cases in the UK has increased by more than 2/3.

How fast is the counterattack?

At the time, the rapidly rising infection data was daunting.

However, the facts are worse,

On July 17, there were 54674 newly diagnosed cases in the UK in a single day, an increase of 68% compared with last Saturday!

This is also the United Kingdom since January this year,

The second time to break through the 50,000-increasing mark 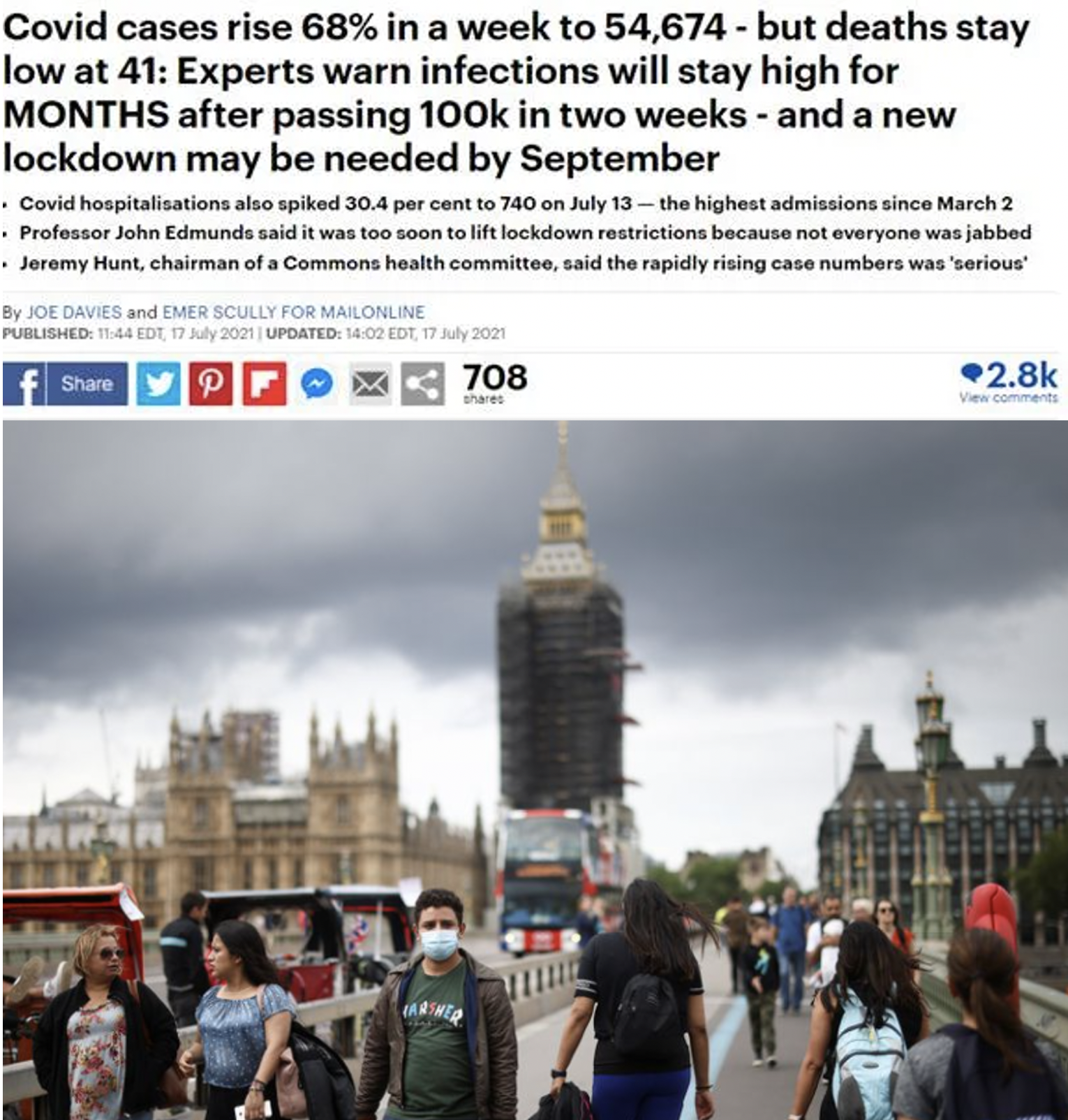 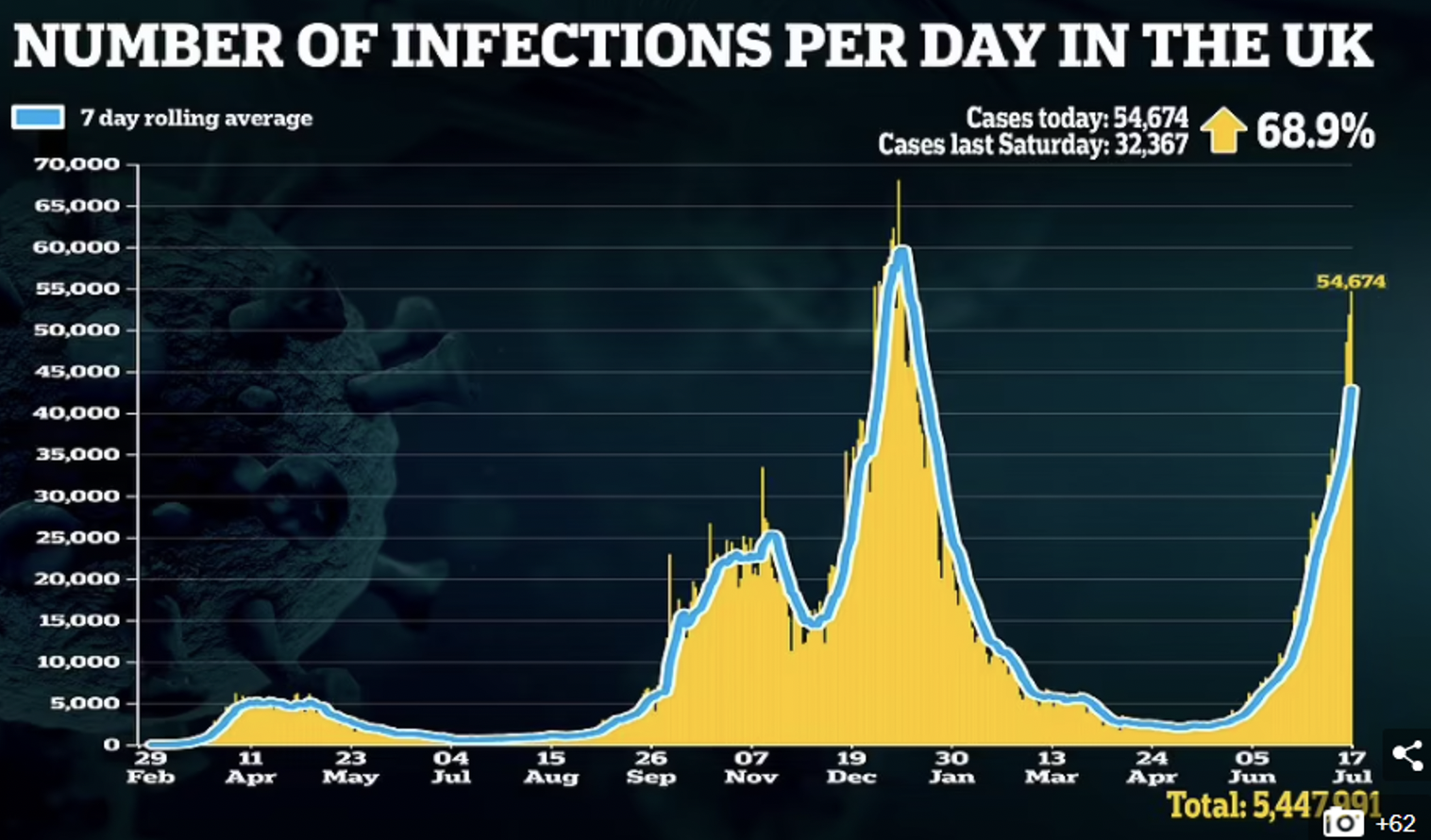 By this fall, the number of new cases per day across the UK will continue to rise.

It doubles every two weeks!

In addition, the number of hospitalized patients with the new crown will double every 2 weeks.

In other words, by the end of August, the number of hospitalizations in the UK will reach 10,000, which is 20 times more than the same period last year!

At the current pace of growth,

The UK will face the "big explosion" of the epidemic in September!

Recently, surrounded by the European Cup and French National Day,

The French trot happily all the way into the holiday season.

Yesterday, France suddenly broke the 10,000 mark with new diagnoses in a single day!

Since May 29th, France's single-day addition has exceeded five figures for the first time...

In the past 7 days, France has newly infected 5103 people every day.

More than 70% of them were infected with the Delta variant.

The European Center for Disease Control and Prevention (ECDC) released its latest forecast:

In the next few weeks, the new crown diagnosis will rebound strongly!

By August 1st, the number of new diagnoses every day will increase by nearly 5 times!

In the coming week, at least 161 people will be infected for every 100,000 inhabitants in France. 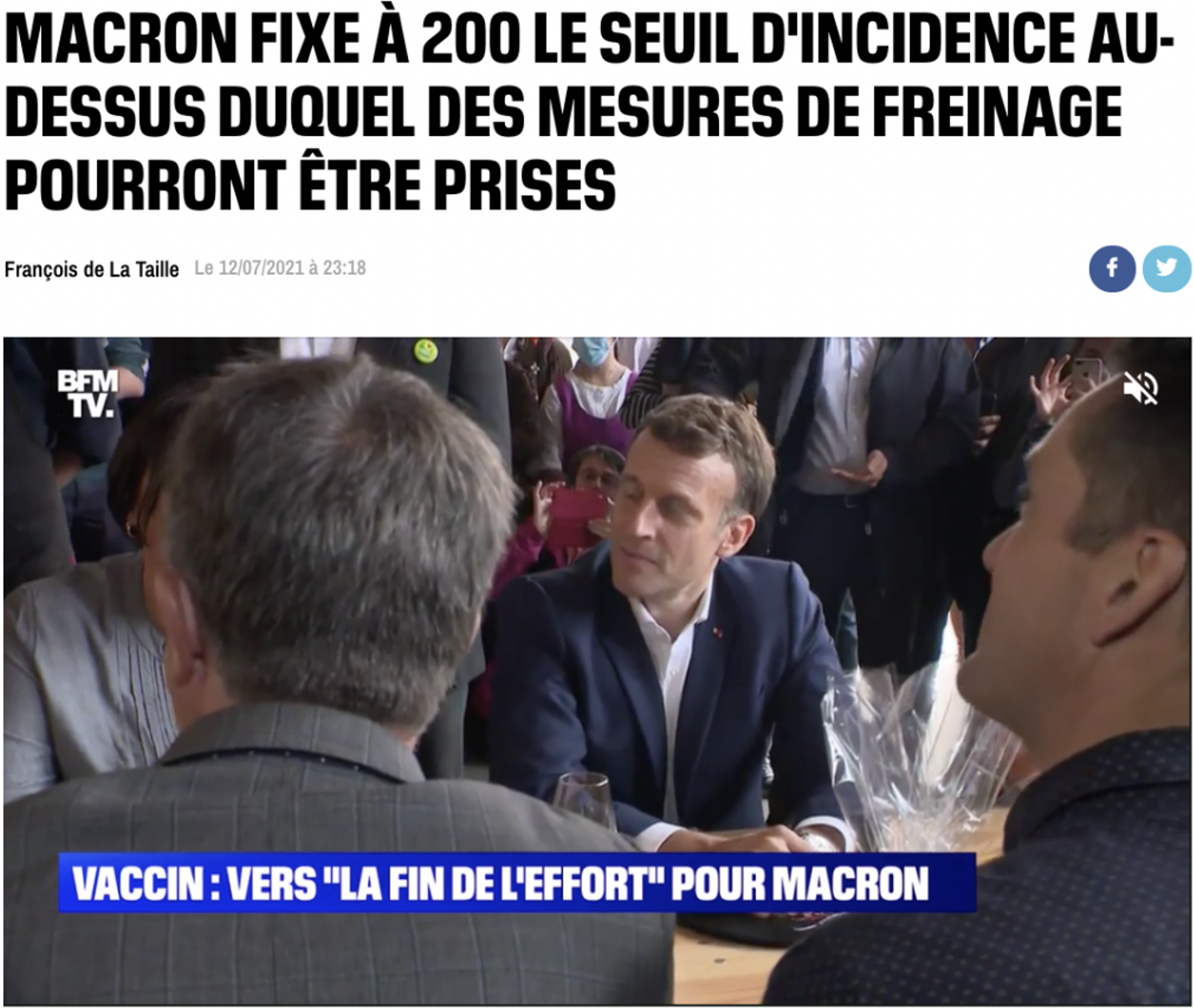 At present, more than 55.1% of French people have received a shot of the vaccine.

44.2% of France have completed two shots of vaccination.

After all, after vaccination, the rate of increase in hospitalizations and deaths will slow..."

The spread of Delta variants is amazing!

The previous Beta variant can replicate 5 cases in 4 days,

In the Delta variant, it only takes 1 day to replicate 5 cases.

The spread of the original virus requires an environment of less than 1 meter and lasting 5 minutes.

And Delta can spread through the air in just a few seconds,

On July 15, the World Health Organization (WHO) once again solemnly warned:

The epidemic that has lasted for nearly two years is “not over yet”,

There is also "new and more dangerous variant viruses are likely to appear",

Moreover, it may be more difficult to control. 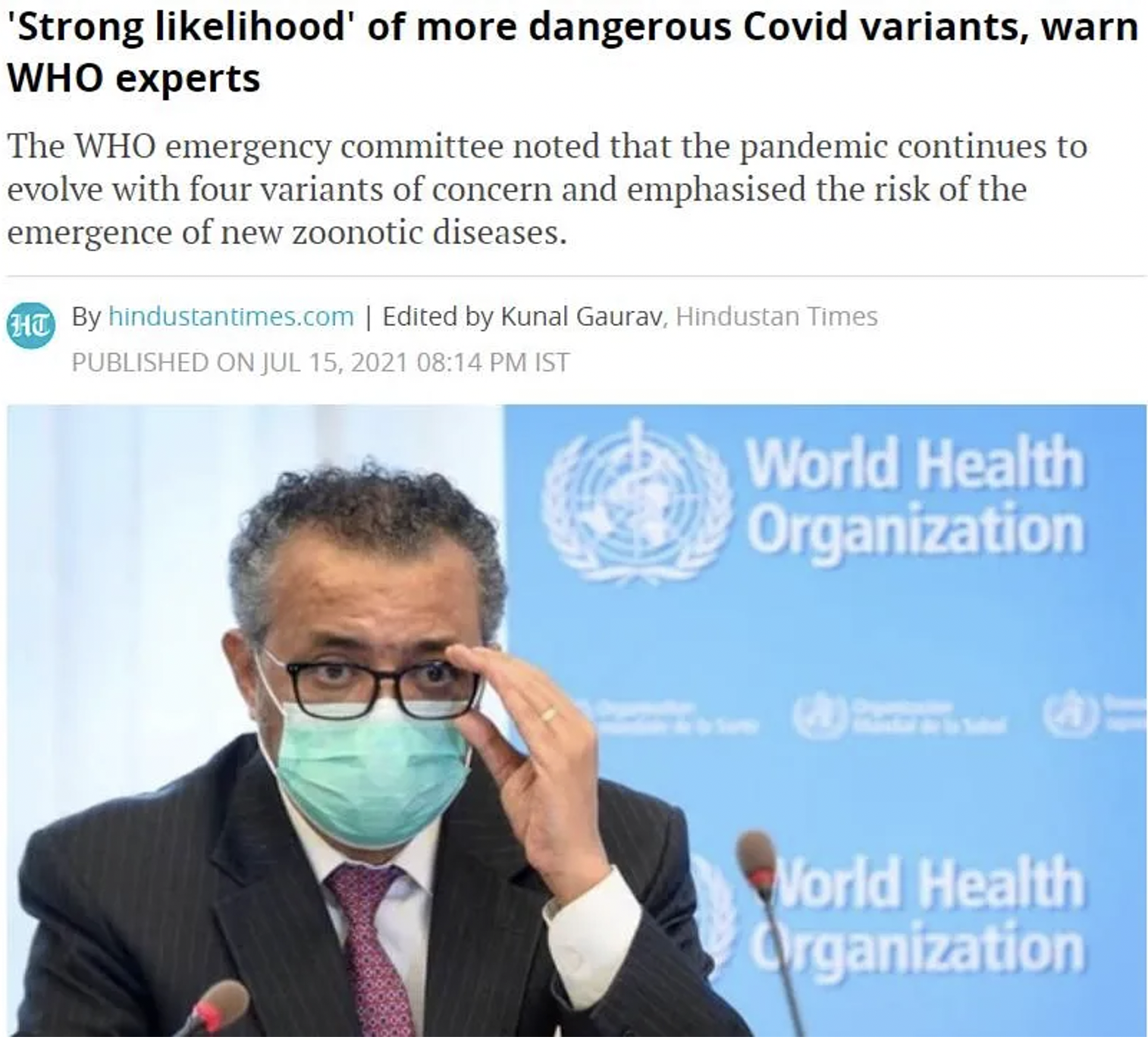 "People are still chasing the virus, and the virus is still chasing us. The recent trend is worrying. Despite the tremendous efforts of mankind, it is clear that the epidemic is still far away from the end!"

"The epidemic continues to evolve, and 4 variants that have received attention, Alpha, Beta, Gamma, and the highly disseminating Delta dominate the global epidemiology."

At the end of the speech, he rubbed his forehead and said a little bit hardly,

"The worse situation may still be behind us."

At the same time, We also saw a set of data:

There are more than 200 kinds of sequels to the new crown! The average person will experience 56 symptoms...

As a result, only 233 people said "I really recovered",

All the others said that they had "sequels" of varying degrees.

There are as many as 56 kinds of these symptoms, which are distributed throughout the body's 9 major systems.

Usually manifested as fatigue, confusion and other minor symptoms,

At the same time, investigators also found many rare symptoms, which they called "new coronary sequelae that are not publicly discussed." 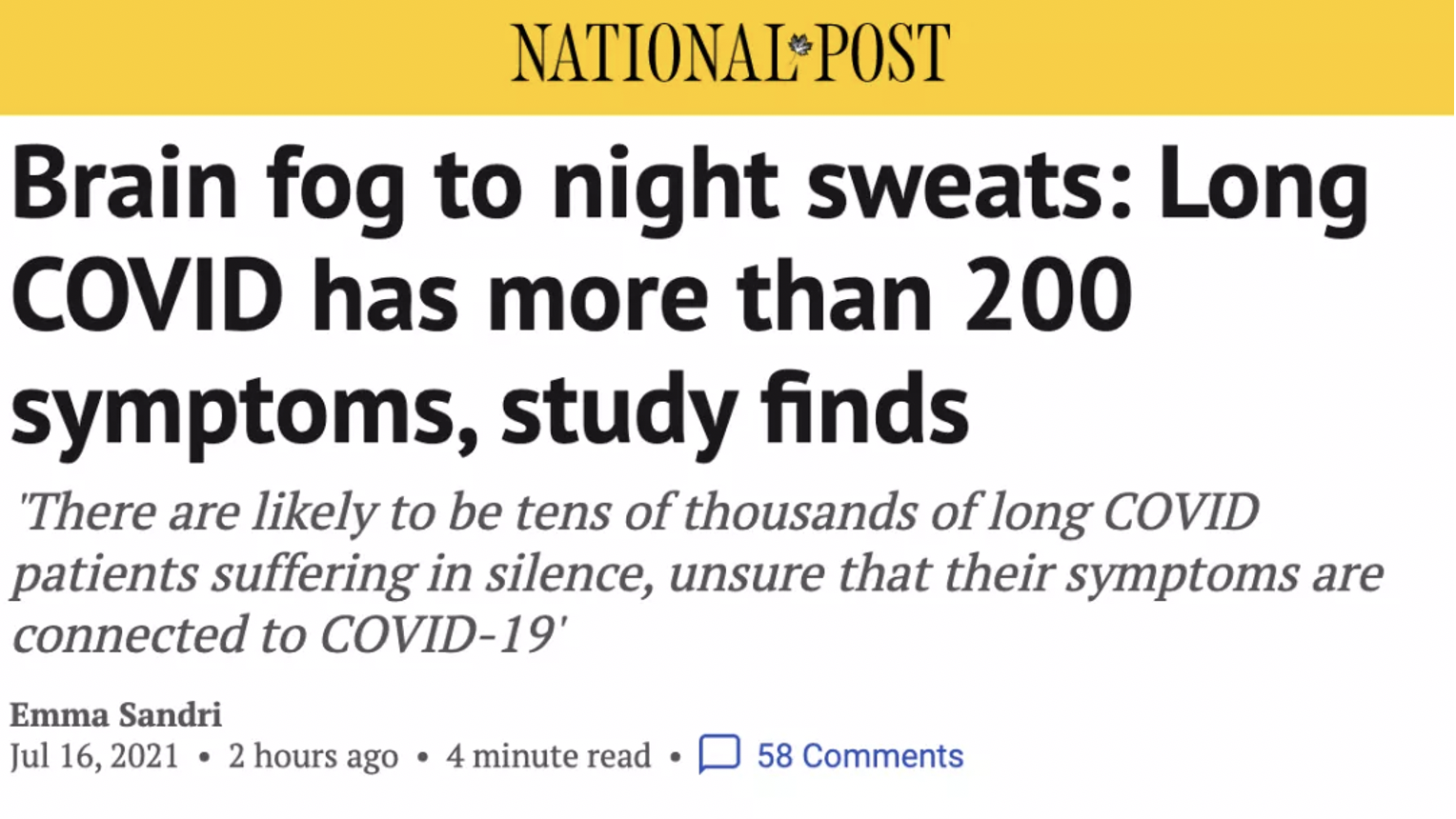 We know that with joint efforts and the development of medicine,

Mankind will completely defeat the new crown one day,

But before that day comes,

Please protect yourself and your loved ones,

And this land under your feet! 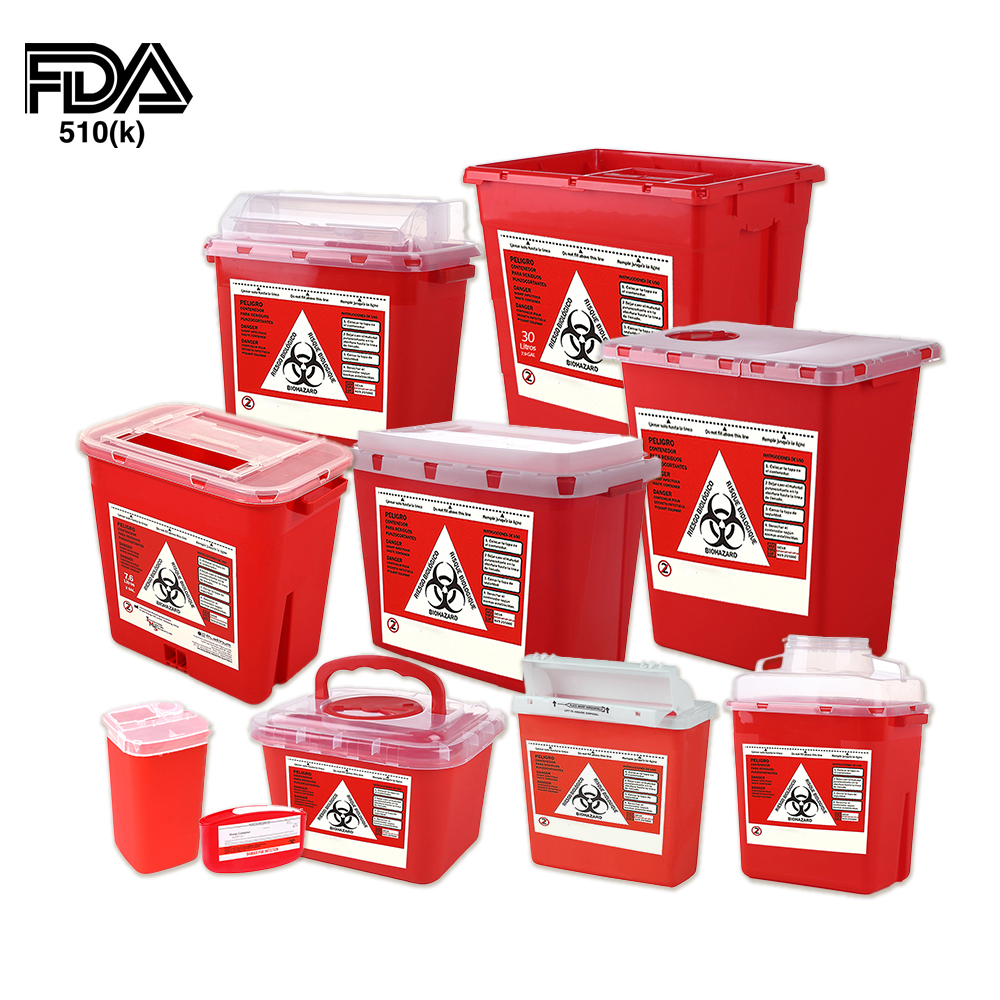